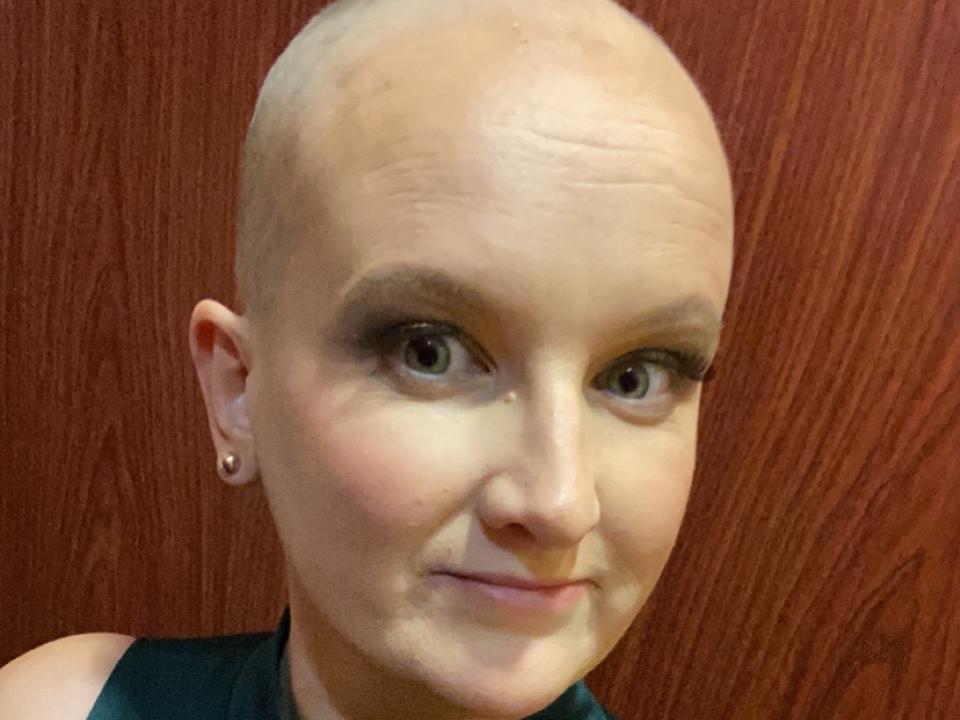 In July 2021, thirty-six year old Áine Martin woke in the early morning at 5am and found her hand drawn to a lump on her right breast “For some strange reason my hand went straight there.

I felt the same place on the other side and realised I was definitely feeling a lump. It felt very solid and there wasn’t much movement to it. I had a wedding ten days before and had been looking for a new bra to go with my dress and I knew the lump was definitely not present then.

I rang my friend the next day, she was a nurse and had gone through a breast cancer diagnosis. She said I should go to my GP and explained what would likely happen following this. It was good to have an idea of what was now ahead of me.”

Áine, who is secretary for her local GAA club-St Brigid’s went to see her GP who referred her for a triple assessment through the public health system. Áine was worried the appointment was taking too long so she decided to book herself an appointment privately in the Galway Clinic.

She was then scheduled for a mammogram, biopsy and ultrasound and when she was called back to the clinic the following week, was told that she had breast cancer.

"If you find something abnormal, go get it checked out. If I hadn’t gone to my GP when I did, my prognosis and treatment would have most likely been very different."

“When they told me I wasn’t shocked, I knew it was cancer and just wanted to know what the next steps were. They said they had me booked in for surgery, a lumpectomy. All I could think about was the first round of the championship, it was the same week as the operation. I asked the consultant if I would be able to still attend the match, he wondered if I had heard him correctly.”

Áine underwent a lumpectomy and had a number of her lymph nodes removed. The consultant found the margins on the lump were clear but unfortunately cancer had spread to one of her lymph nodes. Due to the spread and Áine’s age, her consultant decided to follow up with further treatment.

“Throughout my diagnosis and treatment I used the Irish Cancer Society website to make sure I was getting reliable information. In total, I had eight sessions of chemotherapy over fourteen weeks. AC for the first four and Taxol for the second four. I was incredibly lucky and I didn’t have any extreme side effects. My sleep definitely suffered and I had some nausea but it was manageable. I then finished my final twentieth session of radiation at the beginning of March this year.” Says the Roscommon native.

Áine says she is happy to have her treatment behind her “My energy levels aren’t as good as they were but other than that, I am doing well.  I started a new job with AIB after my diagnosis and before I started treatment. They have been so understanding and I cannot get over the support I have been given by everyone in AIB, my club and community, throughout this experience.”

Áine wants to remind others of the importance of being symptom aware “I was extremely lucky that I knew my own body and I knew when something wasn’t right. If you find something abnormal, go get it checked out. If I hadn’t gone to my GP when I did, my prognosis and treatment would have most likely been very different.”