One month after her 24th birthday, Megan Ennis, from Finglas in Dublin was diagnosed with stage 2 non- Hodgkin Lymphoma.  Megan had always been fit and well, until one morning in April 2017, she woke with a tight chest and difficulty breathing. She went into work and later that day contacted her GP, who sent her to A & E, where doctors confirmed she had a collapsed lung. Megan wasn’t overly concerned as after some scans and tests they sent her home, advising her to come back if she felt any worse.

One week later she had a lung biopsy and PET scan, and on 5th May her doctor told her the dreaded news that she had cancer.  “It was a shock… I was only 24, but I have to admit I did have an inkling that’s what they were going to tell me”.

Unfortunately, because her cancer was so aggressive, she was told they had to begin treatment immediately, meaning Megan didn’t have time to undergo egg freezing to protect her fertility.

“That was the worst part about it all- the thought that I couldn’t have kids in the future”.

Megan’s treatment lasted from May to September and included long stays in hospital, every two weeks to receive chemotherapy.  She lost all of her hair and had extreme fatigue, with some days “feeling like I’d been hit by three double decker buses”.

During her treatment, Megan used the Daffodil Centre in the Mater hospital, which was a huge support to her, they referred her to the ‘Look Good Feel Better’ programme.  Megan says the programme was “lovely because there were other women going through cancer and we all got to talk. "

They made me feel pretty about myself, it was nice to be normal for a while and feel like a normal girl.  It allowed me to forget about everything for a while”. 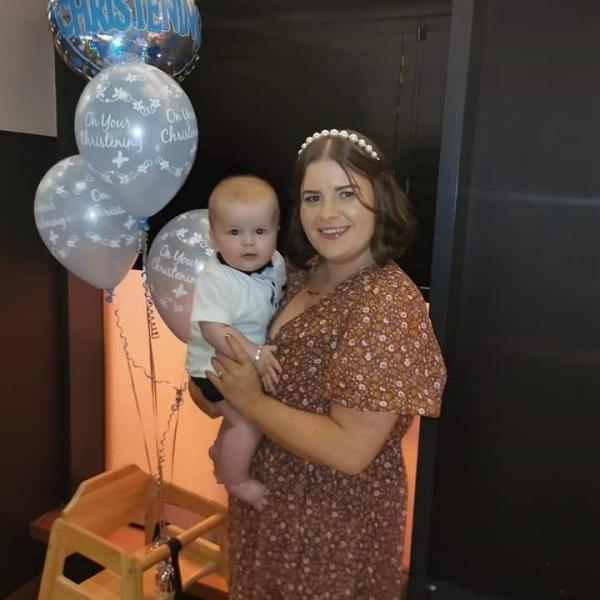 On the 15th November 2017, Megan received the brilliant news that she was cancer free.  Although Megan thought she would be unable to have children of her own, in June 2019 she found out she was pregnant and welcomed her beautiful baby boy, Tadhg in March 2020!

Megan says she is so happy with how far she has come since her cancer diagnosis and is enjoying life as a mum, whilst planning her wedding to partner Aaron, at the end of the year.

She says that trying to remain positive throughout her journey really helped her to get through it and advocates for everyone to really listen to their bodies.

“I’m always saying know your body and listen to it.  Go to your GP and get checked.  You only get one body, you might as well love it”.