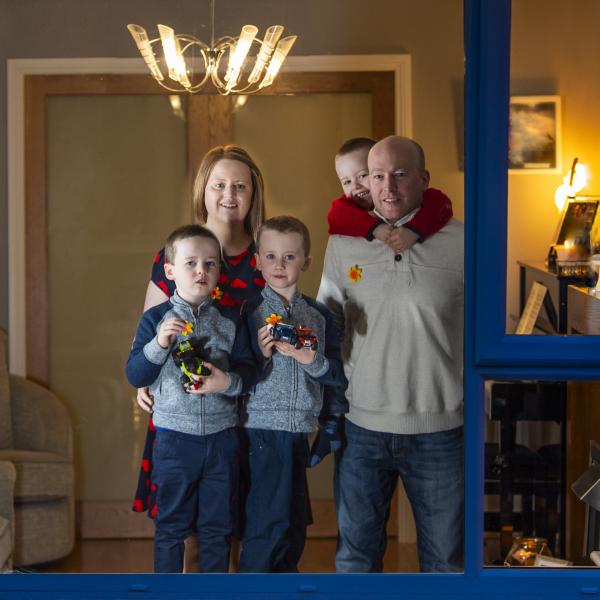 In February 2020, one week before her youngest son’s 4th birthday Louise Collins from Dunshauglin in Co. Meath noticed a small ridge on the side of her left breast.  She knew it was something new but wasn’t overly concerned, so put it out of her mind with the upcoming birthday celebrations.

The following week she visited her GP who referred her to the triple assessment clinic in the Mater Hospital.  However, two days before her appointment Louise was notified by the hospital that her appointment was cancelled due to the coronavirus pandemic.

A few days later Louise began to panic and rang around hospitals herself to see if she could get an appointment.

She says “It was a battle to get an appointment, but my own instinct was saying don’t leave this”.

“I had such a stressful week, the oncologist rang me on the Saturday, I was on my own and he told me over the phone that I had breast cancer, it was absolutely devastating.  At 38 it was the last thing I expected, and with Covid-19 it couldn’t have been worse," she says.

Louise and her husband Fergal have 3 children, Aaron aged 4 and twins Dylan & Reece aged 5.  She stresses how difficult going through cancer during lockdown was, particularly because they couldn’t have any extended family support due to restrictions.  It also meant that Louise had to attend all of her appointments alone and had no visitors during her lengthy hospital stays.

Having secured an appointment at the Beacon the following week, Louise underwent a triple assessment and was told they thought ‘it could be something serious’ and would be in touch again within a few days.  Louise describes the wait as the longest week of her life and tells of the devastating impact of hearing the words “you have breast cancer” over the phone, because of Covid-19 restrictions.

The hardest part about having cancer in 2020 was doing everything alone.  I had to go through Garda checkpoints to get to the hospital.  Even when I was in the hospital for 8 days they wouldn’t let any visitors in, not even my husband.  I had to wave at my kids out the window, it was heart-breaking.

Additionally, the twins, who were due to start school in September had to remain at home due to her being high risk.

She tells how her husband Fergal has been her rock throughout all of this.  “My husband was my hero, he cut my hair and shaved my head.  He did stuff a couple in their thirties shouldn't have to do, we will never take anything for granted again”.

Louise’s treatment plan included 16 cycles of chemotherapy & a mastectomy.   Her chemo began in April and was extremely difficult, side effects included- extreme exhaustion, persistent nausea and hair loss.  Unfortunately, during her chemotherapy, the doctor’s discovered a blood clot on her heart.  This delayed her planned follow up mastectomy, which was deferred until November 2020.

Louise recently finished radiotherapy and is doing well.  Reece and Dylan began junior infants in Mid- November, and Aaron has started at Nursery.  Louise feels reality is beginning to resume after a nightmare 2020.

Although Louise and her family have had an extremely challenging year, she is so grateful for the support she received from the Irish Cancer Society’s Remote Counselling & Peer to Peer service.

She says, “Without the support we got from the Irish Cancer Society, I really don’t think myself, Fergal or the boys could have gotten through it as well”.