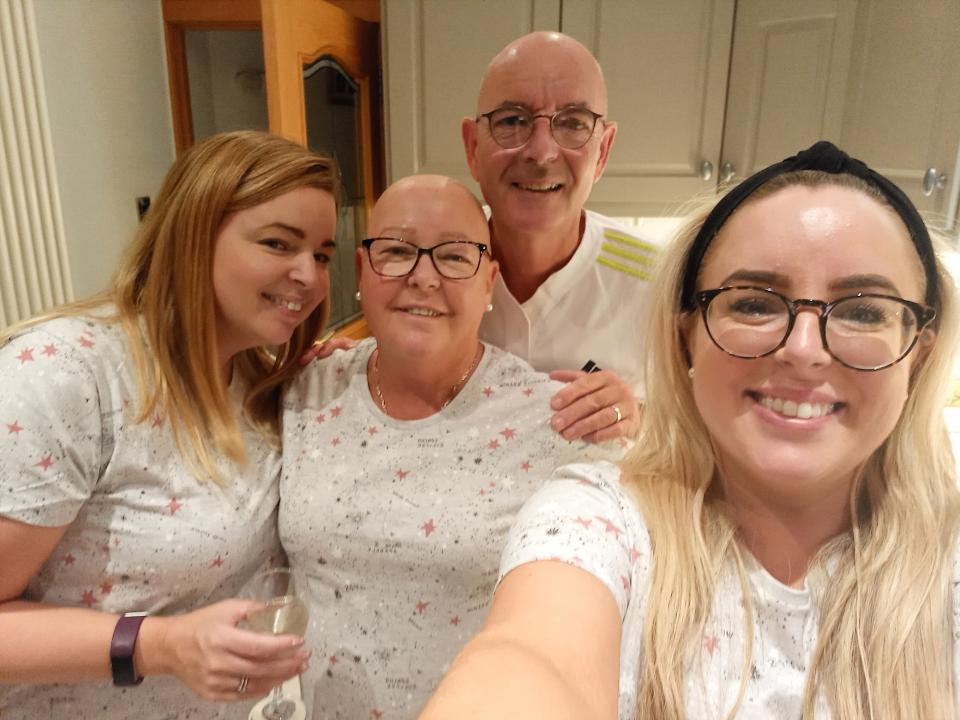 In March 2021 Collette Kavanagh from Riverston Abbey in Dublin noticed her nipple had become inverted “Prior to this my daughter had found a breast lump herself and went to her GP to get it checked out. I thought to myself, I need to go do the same and get this looked at for my daughter."

My GP mentioned that this was something that can happen with age but when I laid down to be examined, the GP then also found a lump.”

Collette, who runs a dental business with her husband Paul was referred on for a triple assessment but unfortunately her referral form was misplaced. Four weeks later, Collette decided to chase this up and was eventually booked in for a mammogram, ultrasound and biopsy.

On the day of her assessment, Collette was told she had breast cancer.
“I was on my own when they told me. When I walked out the door, I couldn’t even remember how to use my phone to call my husband. I couldn’t remember how to bring up his number in my contacts. I felt like I didn’t have the strength to hold myself up on my own two feet.

“Honestly, I think that day was the worst part of the whole journey. Finding out about my diagnosis all on my own. My husband arrived soon after taking my call and we just sat outside together crying. He told me it was the worst day of his life. A few days later I felt the emotions settle slightly and I could look at my treatment plan more clearly.” She recalls.

"I found the restrictions in the hospital tough however. The staff were wonderful and were trying their best, but not having someone there right before and after my surgery, that was hard."

Collette was booked in for a mastectomy and reconstruction which she found wasn’t as difficult as she expected “The pain was very well managed by my team in the hospital. I found the restrictions in the hospital tough however. The staff were wonderful and were trying their best, but not having someone there right before and after my surgery, that was hard.”

Collette then went on to have fifteen sessions of chemotherapy, four AC and eleven Taxol.
“The AC chemotherapy just zapped me of all my energy. I remember having a shower and not having the energy to then dry my body, so I would just lay down on my bed. Then of course the hair loss and also my nails became very weak and brittle.

“When my hair started to fall out, I decided I would just shave it all off. My husband and two daughters decided we would make a night of it, we all stayed together and had matching PJs, pizza, & prosecco. I was totally surprised when my husband also decided to join me and shaved his head too, it turned out to be such a lovely evening.” Collette says.
Collette finished her chemotherapy in November last year and went on to complete twelve sessions of radiation, finishing on the 15th of January.

Collette says she is now doing much better “I feel absolutely fantastic. My energy isn’t 100% but I am getting there. I was lucky that my daughters were working from home the last while so I always had company and support. I remember them saying to me ‘let’s go for a quick walk’. I wouldn’t have the energy really so we would just go around the corner, but those little things really did help me.”

Collette and her daughters decided to go for a family counselling session at Arc Cancer Support, which is supported by Irish Cancer Society funding “We were a bit worried about my husband, he wasn’t talking to anyone about the diagnosis or how he was feeling and was losing weight rapidly. We stayed there for over an hour and a half talking through everything. It is so lovely to know that service is there.

“My daughters had never cried in front of me, but on that day they did. I felt they unburdened themselves.”