General Election 2020: Protecting children from the tobacco and alcohol industries

The Irish Cancer Society is concerned that e-cigarettes are being used to by tobacco companies to target children to be the next generation of nicotine addicts in Ireland.

We want a ban on e-cigarette flavours and on advertising of e-cigarettes.

E-cigarettes contain highly-addictive nicotine and contain chemicals that can cause harm to the lungs, heart and brain. Studies have also shown that young people who use e-cigarettes are far more likely to go on to smoke in later life, than those who don’t.

The tobacco industry knows this too. They want more people to use their products, so they have helped to develop bright packaging, advertising and flavours like bubblegum, slush puppy, and candy-floss, which they’re using to hook young people on nicotine.

2018 research shows that 1 in 4 young people in Ireland aged 15-17 have used e-cigarettes at least once.

We have heard from 3rd and 4th year students, who told us that they believe they are being targeted by e-cigarette advertising and packaging. The students also told us that less people their age would use e-cigarettes if sweet, fruity, minty, and dessert flavoured e-cigarettes were not available.

Large studies have shown that a majority of children who ever use e-cigarettes start by using an e-cigarette flavoured to taste like something other than tobacco.

The Irish Cancer Society wants to see the introduction of legislation which will stop e-cigarette companies from targeting young people to use their products by banning e-cigarette flavours and advertising.

Meanwhile, alcohol misuse among children in Ireland is high, with 2 in 5 15-17 year olds reporting that they’ve been ‘really drunk’ before. Alcohol use among young people can have profound effects on brain development. Alcohol is known to cause 7 different types of cancer including breast, bowel and mouth cancers. 900 people are diagnosed with alcohol-related cancers and around 500 die from these cancers in Ireland every year.

The Public Health (Alcohol) Act was introduced in 2018 and contains targeted measures, including health labelling, minimum unit pricing and marketing restrictions, that will reduce the consumption of those at greatest risk of harm, protect children from slick advertising and save lives.

These measures are scheduled to be introduced over a period of years, and it is vitally important that all provisions of the Act are introduced without delay. 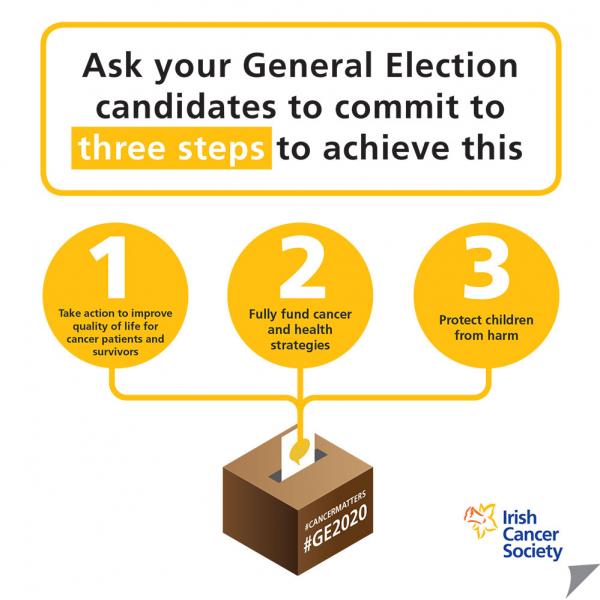