What's in a cigarette?

Tobacco smoke is both toxic and addictive. Find out more about the lethal chemical cocktail inside cigarettes.

Tobacco smoke contains around 7,000 chemicals. Many of these are poisonous and over 60 are known to be cancer causing (carcinogenic). No wonder so many smokers would like help quitting.

The chemical constituents of cigarettes include:

Nicotine
Nicotine is a colourless, poisonous alkaloid derived from the tobacco plant. It is a powerful drug, which affects the brain and quickly becomes addictive.

Tar
‘Tar’ is the term used to describe the toxic chemicals found in cigarettes. It’s a sticky brown substance that forms when tobacco cools and condenses. It collects in the lungs and can cause cancer.

Carbon monoxide
An odourless, colourless gas that is released from burning tobacco. When it is inhaled it enters the blood stream and interferes with the working of the heart and the blood vessels. Up to 15% of a smoker’s blood can be carrying carbon monoxide instead of oxygen.

Ammonia
Ammonia is a toxic, colourless gas with a sharp odour. Ammonia compounds are commonly used in cleaning products and fertilisers. Also used to boost the impact of nicotine in manufactured cigarettes.

Pesticides
A number of pesticides (toxic chemicals used to kill pests, usually insects) are present in cigarette smoke. These pesticides find their way into cigarettes because they’re used on tobacco plants as they are growing. 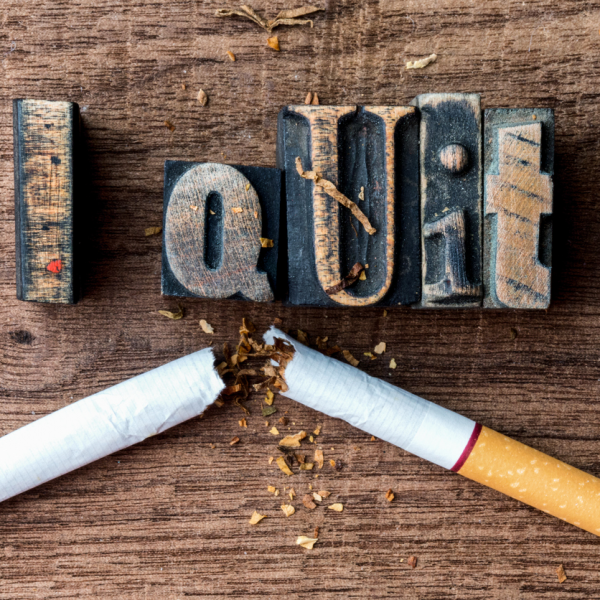 For information and support on how to quit smoking, call the HSE Quit Team on Freefone 1800 201 203 or visit Quit.ie

Information about the effects of secondhand cigarette smoke.
Find out more

The health risks of smoking

Information about the health risks associated with smoking.
Find out more

How you can quit smoking

Information about how you can quit smoking and find support.
Find out more