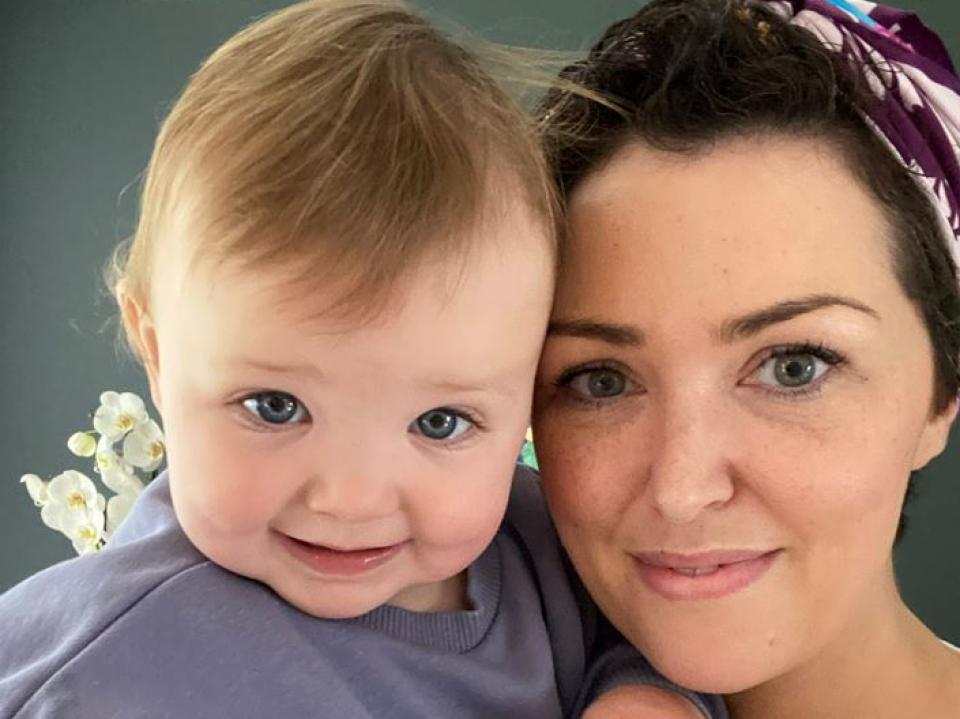 In January 2021, Emma McGuinness was in the early stages of pregnancy. Her morning sickness was severe, and she was busy looking after her toddler daughter, Grace, so she wasn’t surprised that she was feeling tired. Neither Emma or her husband had noticed that she had developed a lump on her neck, until Emma’s mother pointed it out when she was visiting.

“I went in for a scan and was told the lump should be investigated straight away and not left until after I’d given birth,” recalls Emma, who lives in Oranmore, Galway. “By the end of that week, I was booked in to have the lump removed. The following week I had my 20 weeks scan the day before my surgery on Friday. On Monday, they rang me to say it was Hodgkin lymphoma.”

An MRI after the surgery showed that there was another swollen lymph node in her neck and two in her chest. “After that, it was about trying to decide when to deliver the baby so I could start treatment,” says Emma. “Originally they were saying it was going to be as early as 29 weeks, which was very scary. I had a few more MRIs which showed the cancer wasn’t spreading particularly fast although it did pick up to the end. We ended up getting to 36 weeks, which was amazing as there’s a big difference between a baby born at 29 and 36 weeks.”

Ruairí was born on May 26, 2021 and he spent two weeks in the neonatal  intensive care unit in Galway before he came home. One week later Emma started chemotherapy which she had every two weeks for six months. Her maternity leave ended two days before her final treatment  in November 2021 and she then went onto sick leave.

“That meant that while I was still feeling so horrible, I had to fill out all of these forms and take on all these admin tasks,” says Emma. “One of the forms was 18 pages long. I had chemo brain plus baby brain. I was not in my right mind and it made me feel as if I was putting people out and that I should be thinking about going back to work.

“At that point, I just felt so low. As anyone who has experienced cancer knows, when your active treatment finishes you still have a lot of healing to do. In the first few weeks after I finished chemotherapy I was physically feeling worse than ever and that coincided with having to fill out all these forms. I didn’t have a diagnosis of Hodgkin’s lymphoma anymore as I was in remission so I had to list all my post chemo symptoms and detail how they prevented me from working. I wasn’t seeing my oncologist every second week, I had to pay for my own GP to give me a sick note.”

"Unfortunately, for Ruairí’s first 6 months I was in and out of hospital or just too unwell to look after him on my own and we missed out on that."

Emma points out that financially, there’s only a small difference between sick leave pay and maternity leave pay. “Really, every penny counts when you’re in that situation,” she says. “We were lucky that we could still send my older child Grace to crèche because managing two kids at home was impossible for me at the time. Although my medication was capped at €114 per month you do have a lot of additional expenses while on treatment and it definitely puts a squeeze on you when you’re basically a single income family.”

Emma, who is employed by a tech company, had an income protection scheme through work, but she is acutely aware that this is not the case for other women who are in a similar situation.

She urges politicians to pay heed and for the current legislation to be changed so that women who receive a cancer diagnosis can postpone their maternity leave while they are receiving treatment.

“Your maternity leave is important and it should be protected, it should be spent with your baby. I know from my first maternity leave that it’s not easy and it’s probably the hardest you’ll ever work but it is such a precious time and it’s time you can’t get back. Unfortunately, for Ruairí’s first 6 months I was in and out of hospital or just too unwell to look after him on my own and we missed out on that. If I knew at the time that once my active treatment was over I would have 6 months of maternity leave it would have saved me so much heartbreak, guilt and trauma. To feel like you were being protected as you went through this and that there was light at the end of the tunnel would be a real mental and emotional support.”