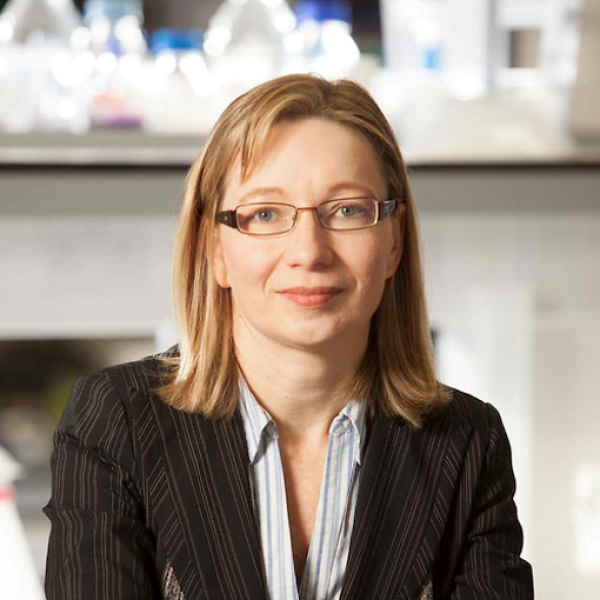 Dr Eva Szegezdi is a Research Lecturer in cancer biology at the National University Ireland (NUI) Galway, and she is Head of Blood Cancer Network Ireland.

Eva received her PhD in Medical Science in 2000 from the University of Debrecen, Hungary after which she moved to NUI, Galway to join the Cell Stress and Apoptosis Research laboratory led by Professor Samali.

During these years, she studied the mechanism of how immune cells kill cancerous cells through the expression of death ligands. Death ligands (e.g. TRAIL) are proteins produced by immune cells that are able to trigger a suicide programme in abnormal cells. TRAIL is a death ligand, whose  main function is to kill cancer cells thus blocking tumour formation and preventing the cancer cells from spreading.

Eva's research looked at the protective effect that normal, non-cancerous cells can sometimes have on a tumour they surround. Specifically, Eva found that the surrounding normal cells next to the tumour can bind to TRAIL and prevent it from reaching and killing the tumour cells.

To address this problem, as a member of an EU research consortium, Eva contributed to the development of therapeutic TRAIL variants which cannot be caught by the normal tissues next to the tumours, and thus can have better anti-tumour activity.

Currently Eva co-ordinates an EU consortium aiming to further understand how death ligands control the ability of the immune system to recognise and eliminate cancer cells, and the therapeutic TRAIL variants are being developed into a tumour immunotherapy by the company ONK Therapeutics Ltd.

Another key activity of BCNI is to bring early-stage clinical trials to Ireland. The first BCNI trial tested the effectiveness of a particular drug called a glycomimetic compound in AML (GMI-1271-201 study). This drug acts by preventing leukaemia and myeloma cells from going to the bone marrow, which makes them more sensitive to chemotherapy. This trial was very successful and since the drug (now called Uproleselan) has received FDA approval. BCNI’s contribution to the GMI-1271-201 study brought two further GMI trials to Ireland (GMI-1271-230 and GMI-1271-301) with the latter one currently open for recruitment and its aim is to evaluate the effectiveness of Uproleselan in combination with chemotherapy in patients with relapsed/refractory AML.

Since its inception, BCNI is an active participant in the Irish research society, clinicians, patients and patient groups, acting as a force for positive change, sharing the results of research with the public through clinical trials giving patients access to world class novel treatments and also through translational research of new treatment strategies.