Linda O’Brien shares her story of receiving a cancer diagnosis at 31 with two very young children, to coming through treatment and running the Colour Dash for the Irish Cancer Society.

You too can support cancer patients by signing up for the Colour Dash Family 5k on Sunday 5th July. 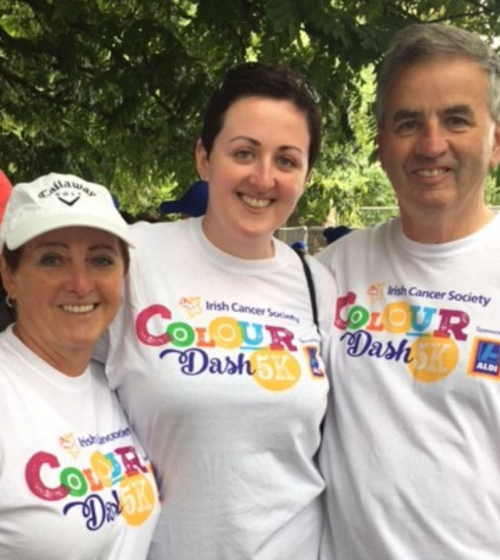 From the joy of welcoming a new baby girl to the family, Linda O’Brien’s world was turned upside down in 2016 when she received an unexpected diagnosis.

“I was having an issue which I thought might be to do with breastfeeding. I was taken into the maternity ward but started feeling better. Soon after I was discharged I found a lump on my neck which I got checked out, and it turned out to be Hodgkins Lymphoma,” said Cork woman Linda.

“I was 31 at the time and had two small babies who were only 10 months and two and a half years old. I just remember it being chaos, and a real shock as we had no family history of cancer before.”

What followed for Linda was a head-spinning series of tests and treatments over the next six months, finishing with her final chemotherapy session just after Christmas in 2016. It was with relief that she eventually got the all-clear two months later.

Throughout her treatment Linda was thankful for the information and reassurance she was able to count on from the Irish Cancer Society Daffodil Centre in the Bon Secours Hospital, and she wanted to give back.

“The Daffodil Centre nurse was just incredible. People were telling us what Hodgkins Lymphoma was but we didn’t understand it, so my husband went down for a chat the first day of my chemo. It was just normal talk, normal language and any questions we may have had they were able to answer them,” recalled Linda.

“When I got my all-clear I asked the family will we do the Cork Colour Dash for a bit of fun and to give back for all the help we’d received. That first year in 2017 we were joined by my mum, dad, three sisters and their daughters and we just had the best time.

“Our own daughters were able to join us for the first time the following year. It was so nice to do with them to show them there are fun ways to give back, and they were devastated to hear it had to be cancelled this year due to Covid-19.”

The O’Briens are nonetheless looking forward to supporting the Colour Dash Family 5k announced to replace the traditional Colour Dash events around the country.