Doreen Mulligan’s family knows more about cancer than most.

The mum-of-two from Artane was diagnosed with breast cancer in 2015 having sadly lost her own father to prostate cancer a number of years previous.

Doreen (46) can still recall sitting down to share the difficult news with her young sons. 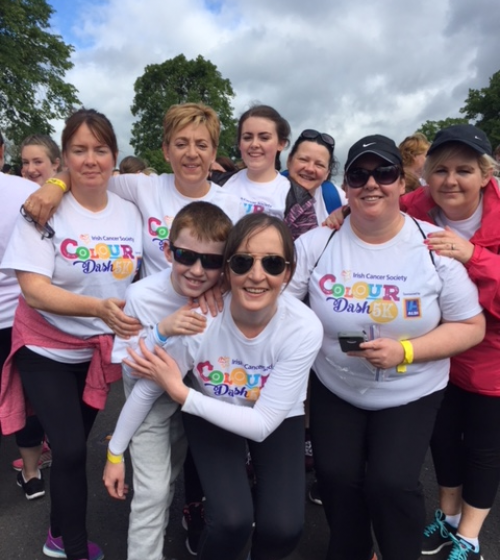 “They were aged 5 and 7 at the time, and I remember explaining it to them in terms they could understand; that cancer was bad cells in your body and I had too many bad cells, and I had to get some special medicine to treat it.

“When I first got my diagnosis I immediately went into mammy mode, and the first thing I asked my doctor was if I’d be finished my treatment in time for my eldest son’s communion the following May!”

Thankfully Doreen made that target, but not without a considerable bump along the way.

“The nurse noticed an unusual-looking mole on my wrist in February of that year just as I was finishing my radiotherapy, and it turned out to be melanoma. Fortunately it was actually dealt with in the same course of treatment as my breast cancer and I got the all-clear in March 2016.”

During her battle with cancer Doreen says she was grateful to be able to call on fantastic support from her family, work, the school and counselling services as well as the Irish Cancer Society Freephone Support line and Daffodil Centres.

“During the journey you’re up and down like a yoyo; you think you’re ok and then something hits you. Family and friends were amazing with their support, but it’s great to talk to people who have been through it and maybe understand more about it.”

Doreen has been doing well recently following her own cancer experience, but in the meantime her family has been touched again with her sister having just finished treatment for breast cancer.

Her sister’s diagnosis provided yet more cause for Doreen and her family to take part in the 2020 Colour Dash event in Dublin, which unfortunately had to be cancelled due to concern for public safety over Covid-19.

“We did our first Colour Dash in June 2016 just after I’d gotten the all-clear, and we’ve done it almost every year since then. It really is a great event; the kids love it, it’s just such fun for the family and the atmosphere at it is fantastic. It’s a shame it’s had to be cancelled.”

Despite this Doreen is looking forward to supporting the Irish Cancer Society’s new Colour Dash Family 5k announced in replacement of the traditional Colour Dash.